Vesterbro is home to some of Copenhagen’s newest restaurants, bars, shops and galleries, turning the district into one of the newest hot spots for the hip and trendy. Though, it wasn’t always this cool. It’s actually in the middle of a makeover that follows in the footsteps of Manhattan’s own Meat Packing District. Here are some of the best tips on what you can’t miss when visiting Vesterbro! 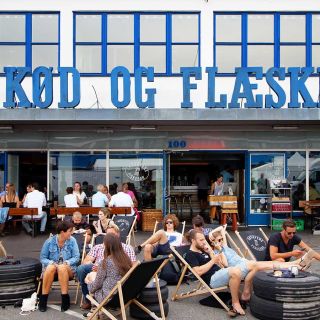 Back in the early 1600s, and in the following centuries, the area was a centre for trading with livestock. Reminiscent of its past, “Kødbyen” makes up a large part of Vesterbro but you won’t find many red meat counters here anymore. The rapid but considerate gentrification of old with the new makes this one of Copenhagen’s liveliest places to stay while on vacation. Let’s go on a little tour! 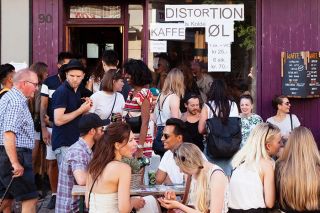 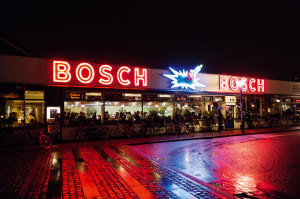 In the southernmost part of Vesterbro is where you’ll find Kødbyen (pronounced kood-bu-en), home to many of the cities favourite “underground” restaurants (literally, check out the new Nose2Tail diner, located in the basement).

One of the enchanting things about this area is also that often many of the “newer” restaurants or bars opt to keep the sign of the previous company. One such example is restaurant Kul, which lives up to its name (”coal” in danish) and offers modern, charcoal grilled dishes and has their name posted in tortuous, yellow neon. Or Jolene, the immensely popular bar named in pink neon above the door, and who have found their haven in Kødbyen because the neighbours complained about the noise and traffic of the old address their in Nørrebro.

Kødbyen should be called the hub of Vesterbro, but that’s not entirely true. The area is rather only part of multiple independent entities that contribute to the making this part of the city the most progressive and interesting. 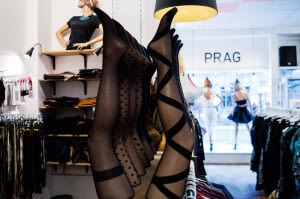 Istedgade runs west from the Central Station (Hovedbanegården) and all the way towards Enghave Park bordering Carlsberg’s old brewery. Cornered at the beginning of this street just behind the main station is home to Copenhagen’s “Chinatown” (while a meek comparison to San Francisco’s) it creates a cozy little corner for one’s Asian essentials.

The history of Istedgade for many years was dominated with being the slums of Copenhagen but with its recent sprinkle of new pop up shops (such as Kyoto who’s clothing lines come straight from the production site from Danish, European and Asian manufacturers) and diverse restaurant offerings (such as Sticks and Sushi or family-run vegetarian cafeteria MADglad). 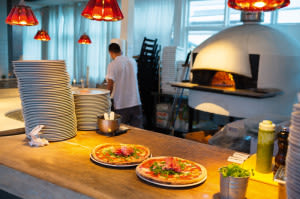 While the street borrows its name from the district, it has a personality of its own. Vesterbrogade starts from the magnificent Town Hall Square (Rådhuspladsen), continues past the Tivoli Gardens, the block of hotels and pulsates further west along a jumble of city life until, at Søndermarken and Fredrik’s Slot Have, it changes its name to Roskildevej. On this street, it’s so easy to spend a whole day and get access to all the stores, restaurants and attractions to your heart’s content.

A day can start with a tour of København’s Museum, followed by takeaway lunch from Joe and the Juice across the street or with a picnic at Enghavevej park’s rose garden; which takes you a on a stroll towards Carlsberg’s old brewery or the Copenhagen Zoo for a second day activity with the kids and walk around Søndermarken park in the early evening. Dinner plans can start with a cocktail at LeLe’s Tiger Bar with dinner at the Singaporean restaurant Nam Nam just located across the street, or perhaps at the popular and buzzing Danish restaurant, Madklubben. 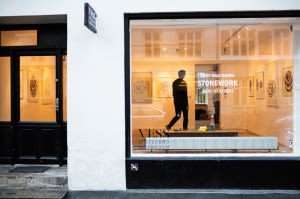 Oehlenschlægersgade has more to offer than just the name that is mildly hard to spell and its rawfood cafe. It is also known as the “gallery street”. Around 100 meters south of the local simpleRAW restaurant you will find Vess, a gallery run by nine young boys who are of the view that the galleries should not only showcase the work of unknown artists; but first and foremost be a place where young creative people can go to get their art out to the public eye.

One of the most famous is perhaps V1 Gallery, which mixes established artists with promising newcomers. Another is Galleri Bo Bjerggaard, which began in 1999, showing contemporary art at European Flea Markets, such as the big summer market that is open every Sunday in the Carlsberg area. But if you’ve done your tour at Oehlendschlægersgade and looking for more, Kødbyen also features a large selection of galleries. 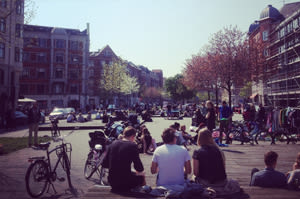 Last but not least, tucked between your travels to Kødbyen, lies Sønder Boulevard. Previously a high traffic road converted with cozy patches of grass ideal for hangouts and pizza in the sun. It is also a frequent home to local flea markets (loppedmarkeder) in the summer, contains several basketball courts and has one of the city’s most hipster cafe, Cafe Dyrehaven. While this street is quieter in comparison to its northern parallels (Istedgade and Vesterbrogade), it features some of the cities best works of art covering its green Metro walls.

Map and guide to Vesterbro

Need a handy guide to all the streets, shops and restaurants listed above? Check out our Handy Guide to Vesterbro below. 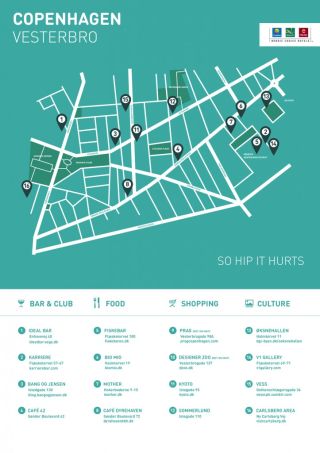 Looking for a place to stay in Vesterbro and Copenhagen?

Nordic Choice Hotels offer several hotels in Copenhagen. Here is an overview over hotels, prices and more info about Copenhagen!

This is a rewritten article from original article by Peder Edvinsson that appears in Nordic Choice Hotels’ Nights magazine in Norwegian.

The Dos and Don'ts of a Nordic Autumn Break