Checkin' In: Catarina Molen-Runnäs – the lady with the helmet and leather trousers

How do you decide what a hotel should be called? How to determine whether a new hotel will be a Comfort Hotel®, Quality Hotel™ or Clarion Hotel®? And have things ever gone really wrong with a planned hotel project? Chief Property Officer NCH & CEO Nordic Property Management Catarina Molén-Runnäs, is ready to share this and lots of other interesting information with you.

Catarina is responsible for Nordic Property Management, the company within Nordic Choice Hotels, which among other things builds and furnishes our hotels. After graduating from engineering studies, she went from working with heavy construction projects such as bridges, tunnels and roads, to working with textiles and hotels, she tells us. Everyday life is not as glamorous as people think:

– I spend more time in a helmet and leather trousers than a suit and heels, says Catarina. “Leather is much easier to wipe off,” she says with a laugh.

How does a hotel project start?

– There are several different ways to start a hotel project. It might be urban development in an area where they think that a hotel might be good, or that there is a plot where they start building a hotel from scratch. The most common situation is that a building owner has a building that was previously an office, post office, bank or similar and that maybe doesn’t fulfill its original purpose anymore, but which can become a fantastic hotel.

The spa hotel Yasuragi was originally a course and conference garden drawn up by a Japanese architect, and that was where the Japanese concept came from.

How long does it take for a hotel project to actually turn into a hotel?

– It's a long process. From when we first get the idea of a hotel to opening the doors, it can take up to 4-5 years. Things take time. There are many laws and regulations that must be taken into account, as well as negotiations and agreements that will take place before the hotel is even begun being built. Most people start thinking about the hotel the last year before opening. That's when the hotel starts to take on its proper form from the outside, the hotel rooms are sold and staff are recruited, and that's when it is exciting to talk about the hotel in the media, especially in the weeks before opening.

Before the hotel opens its doors to guests and locals, there are thousands of questions to be answered and the hotel has to have a concept. Will business travellers or leisure guests be in focus here? How should the hotel contribute to its local environment? And should it be a luxury hotel, spa hotel, or a budget hotel?

How do you decide if a hotel will be a Comfort Hotel®, Quality Hotel™ or Clarion Hotel®?

– “The hotel chain is actually decided pretty fast. We look at the market and the destination of the hotel, what type of guests we think the hotel should be for, what is in the surrounding area, and then we have to look at other hotels we have at that destination. Do we need a budget hotel or an upscale hotel in this city? We also look at the physical conditions of the building. If there is room for small and practical hotel rooms with fewer common areas and the building is centrally located, it goes without saying that the hotel will be a Comfort or Comfort Xpress Hotel.”

How do you choose the hotel name?

We choose this based on the location and destination, but it may also come from a competition, as we did with [Quality Hotel™ The Weaver] (https://www.nordicchoicehotels.se/blog/nytt/tavling-quality-hotel-kallas-i-molndal/) in Gothenburg.

Sometimes the names are quite obvious, such as Amerikalinjen (the America Line), which has rich history in the building, or hotel Sommerro located on Sommerrogata in Oslo. The airport hotels have the airport name in their name. Quite logical really. 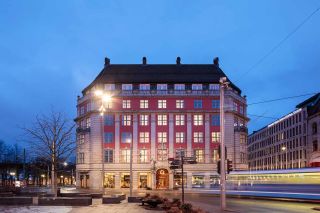 How do you choose an interior style when the hotel is going to be around for so many years?

– The hotel chains each have their own concept and their look and feel that gives certain guidance. It is important to have a timeless base and then add accessories. It's a bit like building up a wardrobe. You have basic garments with blue and black, maybe a suit or two, and you can also add trendy accessories. It is also a bit about knowledge. We of course have hotels that have been around for a number of years and that have been renovated, so we know which materials are durable.

So, how much does Petter A. Stordalen actually decide?

– Petter is very much involved in the hotel projects, after all, it's his company! He brings many good ideas and recommendations, and challenges us to think in new ways and be creative. But both Petter and Torgeir (CEO of Nordic Choice Hotels) firstly do not have the time to fiddle with everything, and they know that they cannot help make a decision on every detail, so they are good at delegating tasks.

Petter has really gone to town on TAK in Stockholm. We called him the project manager over there because he had so many ideas and suggestions. You can go through all the hotel projects and find things he has been extra engaged in. The reception at Clarion Hotel© Post in Gothenburg for example, was his idea. And the wonderful statue of Jaume Plensa in the stairs at At Six would not be there if not for Petter. 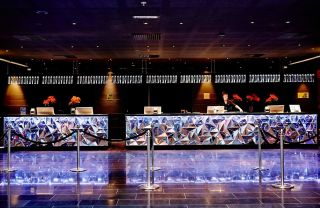 The nice reception at the Clarion Hotel Post is made of Swarowski crystals.

What is the best thing about your job?

– It’s probably the people. I meet so many people in my job, everything from carpenters, to cooks and hotel managers. And the most enjoyable thing is working with my colleagues and working with a hotel project from idea to completion, with a fantastic and unique hotel as the end result.”

When has a hotel project gone really wrong?

– Now I’ll have to think carefully about what I say…” says Catarina and smiles wryly.” In almost every hotel project we have come across challenges. At Amerikalinjen, for example, we had two floods because of the pipes out in the street. We were a little surprised when we came in and saw the water spraying up. We stood with water up to our thighs just 4-5 months before opening, and it wasn't quite what I had envisaged.

Which hotel project has been your favourite?

“No, no, no – don't ask me that,” says Catarina, scared as she laughs. “It's like asking me if I have a favourite child!”

Some projects are more challenging than others, but I don't like them any less for that reason. It's the same with kids: the memories you remember best are perhaps when you mastered something or solved something together. So in retrospect, I think that the hotel projects that have been most challenging or difficult are the ones that have been the most fun.”

Is there a building in the Nordic region that you would have liked to see as a hotel?

– Yes, several actually. Stockholm Castle would have been nice, but it would probably have made for inefficient hotel rooms. Otherwise we have the Central Post House in Stockholm which could have become a nice hotel. If I walk around the city and see a building that could be nice as a hotel, it may happen that I contact the building owner and ask. Especially if they are old buildings that have been standing and falling apart for a while. Then we can rather transform them into great hotels!

We'll see if there is ever going to be a royal hotel in Stockholm in the future, or new life in the Central Post House. Until then, you can check out all our unique hotels in the Nordic & Baltic region here.

Check out some of our new hotels being built in the Nordic countries:

Which is your favourite hotel? Hard to choose! I do not want to choose one of ours hotels, because then I'll start thinking about things that should be renovated. So I choose Hoxton Holborn in London.

What is the best thing about staying at a hotel? To sleep in a comfortabl hotel bed with cool and clean sheets.

What is the worst thing about staying at a hotel? It doesn't happen that often, but when you get a room someone has smoked in.

If you could choose – who would you eat hotel breakfast with? Ian Shrager, renowned hotelier and founder of Studio 54.

What do you always eat at the hotel breakfast? Yoghurt with berries and muesli.

Do you have any strange habits when travelling? I always pack exercise clothes with hopes of working out. Usually I come home with clean clothes...