Aurora’s story about being a trans woman "I’m not a boy. I’m a girl."

Aurora is a trans women. It means she was assigned male at birth but identifies herself as a woman. She was never a man, but a woman who lived as a man for 25 years until she finally dared to be true to herself. This is her story.

It’s not easy for Aurora to explain how, but she knew early that something was not quite right:

It was 1997. Hercules had just premiered at the movies and Aurora was 6 years old. Autumn arrived and so did Halloween, a tradition that wasn’t much celebrated at the time. Particularly not in a small town like Valderøya. A catalogue arrived in the mail from a toy shop, it was filled with pictures of all kind of fancy-dress costumes.

– The catalogue had pictures of a girl with short hair, almost bare shaved, and she was a Megara model, the female character in the Hercules movie. It made me think, why couldn’t I look like that. That’s my first memory of something not being quite right.

Her upbringing was fairly common – a typical “boyish” upbringing, as Aurora puts it – with a dad who wanted to teach Aurora to play football and fishing. Activities that didn’t interest Aurora much.

Aurora loved to sing as a child. This turned out to be a problem when she reached the age of 12-13 and entered puberty. All of a sudden, the voice changed. It deepened. The body changed as well, and her school mates’ bodies transformed too.

She began to experience gender dysphoria, meaning she felt distress due to her birth-assigned sex not matching her own gender identity.

Aurora comes from a small town where you regularly either go to church or to the praying hall. She had never met a gay person until she entered high school. And it was when she was a youth herself that she began to understand she actually wasn’t a boy – she was a girl.

– That’s when I had to spend time to understand myself and figure out who I was. I read a lot online, watched Google videos and researched articles to read.

Still, it wasn’t until Aurora reached the age of 18 that she reached out to someone. She came in contact with Harry Benjamin Resource Centre, an Norwegian organisation involved with people who experience gender dysphoria. Here she got access to information about the process of becoming a girl, and she also obtained information material to provide to friends and families about trans people.

Still, no one knew that Aurora wasn’t a young man. 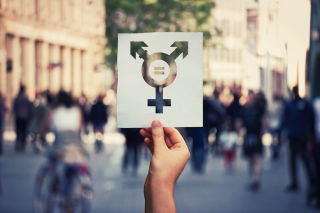 The fiance and friends

When Aurora stood on the brink of adulthood, as a young adolescent, she met her girlfriend. For people on the street they looked just like any ordinary heterosexual couple.

– I really liked her a lot. So, I started to suppress my true emotions because I wanted to be with her. The relationship suffered a bit due to this. It’s never a good idea to suppress something like this for years.

After high school, Aurora started studies at university. A period in her life when she hardly had any friends at all.

– That’s what life was during most of my younger years. I did have “friends”, but I didn’t want to get too close to them. I kept the truth about myself secret for such a long time, and it was a lot easier if I didn’t have to lie all the time.

A best friend and a psychologist

In 2013, Aurora and her partner moved from the their little home town to the capital city, Oslo, where she started her studies to become an animator at NKF (A university in Oslo, Norway, editorial note).

– The first month in Oslo was really hard for me. I struggled with motivation and found it difficult to activate myself. After some time however, we were split into different group projects and had to work out in the field. We were out in the city for photo shooting, which was one of the best experiences I've had. That's when I got to know one of my best friends. She has been of great support to me over the last few years.

“I just have to say it out loud and get it out there”.

It took almost a year until Aurora had regained some strength and felt more positive about things, but there were still room for improvements. That’s why she decided to see a psychologist.

– The first hour was really awkward. I spent the whole hour talking about little insignificant problems I had. And then, five minutes before the end of the hour, I suddenly said “I just have to say it out loud and get it out there”. That’s the first time I told anyone that I was trans.

Still, it took another six months for Aurora to tell her best friend. Aurora came out to her via SMS.

– I got a flood of text messages in return. It was just great - all of it. It was an enormous relief and she has helped me so much since then.

It took several months for Aurora to tell others about her situation.

After numerous conversations with sexologists and referrals to a GP and DPS (District Psychiatric Centre, editorial note) she finally got acceptance from DPS in 2016 to receive treatment at Rikshospitalet (the National Hospital). She received a big pile of papers to read and it became clear that a precondition for receiving medical treatment was to come out.

I told my partner in December 2016. We had been in a relationship for seven years then and was engaged to get married the following year. We broke up two days later.

Aurora told her family at Christmas time the same year. She wanted to explain why she had broken up from her partner who she had been with for several years. She was 25 years old at the time.

– First, I told my parents and my oldest brother. There were lots of tears and other normal reactions, but they were also supportive. My mum went to get my youngest brother, who is ten years younger than me and my sister who is six years my junior. My sister simply shrugged her shoulders and said “cool” when I told her. That was the best reaction I could have hoped for. She’s been very helpful since then and showed me how to put on makeup and stuff like that. It has actually brought us closer.

My family doesn’t always remember to call me by the correct name or right pronoun, but Aurora is happy as long as they try. That’s what’s important to her. 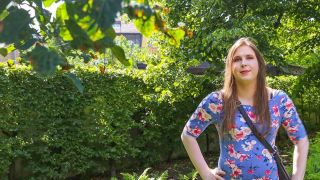 Aurora is aware of strange looks and whispers behind her back. Such is life when you live in a small town, she says.

– Two months after having come out, I went to buy some cloths in a shop in town. The lady in the shop asked which size I was looking for and if I was buying for myself. She said that, as a matter of fact, she had been to a course where she had learnt how to deal with “people like me”. She suggested I came back during after-hours or that she could arrange for a man dressed in lady wear to come along.

Another experience she clearly remembers happened during what should have been a good day, namely the last day of the Pride Festival in Ålesund:

– When the Pride Festival was over and the rainbow colours and the bling had been removed, my sister, a girlfriend and I were about to take the bus to get back home. The bus driver opened the door and gave me an ugly look. He asked, “what is that” and pointed at me. I was in a great mood and hardly got a chance to tell him about Pride before he said I was sick and ought to be in hospital. There was a person on the bus who, rather than backing me up, said the bus driver shouldn’t have “said it out loud”. It was a sad end to what had been a great day.

A support team of fifteen people

After having told her family, Aurora wanted to tell everyone. Soon after, she sent a message to her manager at Vinmonopolet in Moa and asked for a meeting. Aurora was completely open and honest, and the manager reacted by embracing Aurora and saying she was really proud of her. The next week she told everyone at an employee meeting.

– I was really nervous as there were fifteen people there from different age groups. Some were close to retirement and others where just around 20 years of age. Some were grandparents and some were grandchildren. Anyway, I told them. There was a person sitting right next to me who got emotional and I could see tears coming down her cheeks. Then everyone hugged me.

“If anyone is mean to you, just tell us and we will deal with them”

Although Aurora is back in Oslo and looking for work within animation, her group from Vinmonopolet in Moa is always present in her life. They are following her on Facebook and keep up with what’s going on. It means a lot to Aurora, knowing she has a group of fifteen friend who support her no matter what.

– They have really made an effort to try to understand. They ask me questions, which I welcome and encourage. I’m totally open and have no filter. It’s easier that way as I don’t have to pretend.

Aurora’s advice to other young people in the same situation

We love diversity and hate discrimination

Both guests and employees must feel welcome regardless of what gender identity and sexual orientation they have, and everyone must feel included. There are room for all at our hotels, no matter who you love or how you identify yourself. Read more about how Nordic Choice Hotels celebrate Pride as the proud main sponsor of several Pride Festivals in the Nordic region.

Who is Aurora Syvertsen?