Christmas in the northern European countries (Scandinavia) is pretty much the same, not matter where you go, right? Wrong! As everyone knows, Christmas is a pretty traditional and somewhat conservative holiday, which has resulted in an array of different customs in each country. Here are the secrets to the perfect Nordic celebration in each country.

Winter is officially here and in Scandinavia, while the celebrating of Midsummer in Sweden is a significant occasion to symbolize the end of long dark winters – Christmas is a time to bring light, joy and happiness to the darker days of the year with with family and friends. As we approach the holidays in Scandinavia, let’s get to know the traditions that make Christmas one of the favourite holidays for Danes, Norwegians and Swedes. 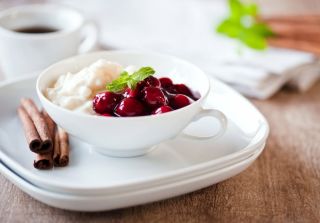 Rice Pudding, the traditional Danish Christmas dessert. You've got to have it with cherry sauce.

The Danes celebrate Christmas on December 24 and they call it Juleaftensdag. It’s a time for enjoying the company of family and friends with a nice dinner spread, which usually consists of roast pork, duck or goose served with plain boiled and/or roast potatoes, with a side of boiled and herb-seasoned red cabbage. In most families, grandmother’s famous gravy should also be sitting on the table. For dessert you’ll have hot rice pudding (risengrød) served with a cherry sauce. As the tradition, there will be one almond hidden in the pudding and whoever ends up getting the almond, wins a small gift. So be careful with your bites!

After dinner comes the most important part: dancing and singing around the Christmas tree. The tables are moved out of the way to make room, old and young hold hands and the carolling begins. When everyone is out of breath, then the gifts start getting passed around from under the Christmas tree. Hopefully everyone gets what they had wished for and the family enjoys some candy and mulled wine (called gløgg) together.

But then where are the snaps? That is reserved for Danish Julefrokost (Christmas lunch), which is usually held in smaller groups of friends during the month of November and December. 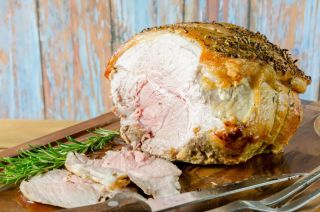 Roast pork, one of the Norwegian traditions on the Christmas dinner table. Two other important dishes are lutefisk and pinnekjøtt.

Just as in Denmark, Christmas in Norway takes place on the eve and is all about family and spending time together with the people you love. Norwegians start celebrations early (usually by the first of advent) with a lot of eating! A couple of the traditional dishes are "lutefisk" and "pinnekjøtt". You’ll also find roast pork, Christmas sausages, ribs and much more on a typical Norwegian’s Christmas table.

After dinner, the family will gather around the Christmas tree and sing or for some, also dance. For families with young children, Santa Claus will pay a visit and hand out all the presents. After a long and eventful day, relaxing is usually the finale. 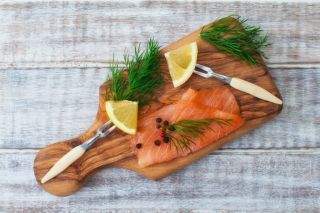 Cured salmon together with a wide selecation of pickled herring is an absolute must when celebrating Christmas in Sweden.

Many of the Danish and Norwegian traditions are also shared with the Swedish ones – with a unifying theme to gather and spend time with family and close friends. Christmas season in Sweden begins at the arrival of the first advent and continues into a month of decorating, gift shopping, baking, cooking and just getting into the Christmas spirit.

Swedes will also celebrate Christmas on December 24, with many families having their own traditions for the day. What’s different in Sweden than its counterparts in Norway and Denmark however is the Christmas food that is served on a julbord (Christmas table) – which is a big buffet, or smorgasbord, filled with different dishes. Some of our favourites include lots of pickled herrings with different seasonings, Janssons frestelse, meatballs, prinskorv (lightly smoked sausages), different kinds of cabbage, omelettes, cured salmon, julskinka (Christmas ham) and ribs to name a few. However, the rice pudding with a hidden almond is (surprise) part of the Swedish tradition too.

In Sweden there is one tradition that has stuck with them since 1960, and that is watching Donald Duck! Every Christmas Eve at 3pm it airs on TV and the audience rating is sky high. Everyone wathces it! As with the Norwegians, Swedes also get a visit from Santa who hands out the gifts. Some families might also dance and sing around the Christmas tree then as with all traditions, relaxing. During the evening it’s all about playing games, drinking mulled wine, cracking nuts and eating candy.

If you’re not from Scandinavia you might think that some of these traditions are quite odd, and we really understand that. However, if you take one important thing to remember from how to celebrate a Scandinavian holiday (or any other holiday for that matter) is that the main reason for celebrating is to be able to spend time with the people you love. It’s also a really good excuse to eat loads of food and candy, stay inside, cuddle and just relax.

Wherever you are or whoever you are celebrating Christmas with, we hope you are showered with love and happiness.

Where does the Scandinavian word for Christmas come from?

The Scandinavian word for Christmas is "Jul" in Swedish, danish and "Jule" in Norway. The word stems all the way back to the Viking era, and is a modern variation of the words Jól or Yule - a pagan holiday that was celebrated in mid-January.