Everything you need to know about the lively Pride festival!

Prepare for this year’s most colorful festival – Pride! How much do you really know about the Pride movement? What does the flag mean, what are the most famous songs and what famous events have made Pride what it is today?

What is the Pride movement?

The pride movement is part of the gay rights movement, which allows people to be proud of their sexual identity, celebrates the diversity of sexual orientations and calls for sexual orientation and gender identity to be recognized as part of a personality. The Pride movement is seen primarily in the form of Pride Festivals or Parades — often with a carnival-like experience filled with color, decorations and joy. Festivals and parades exist today in many cities around the world. 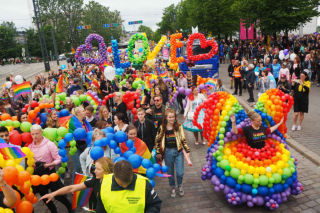 The word ”pride” first appeared as the name of the Los Angeles-based gay rights organization, Personal Rights in Defense and Education, founded in 1966. The Stonewall Riots three years later, in 1969, in New York were an important milestone in the political development of the movement. The riots allowed transgender, lesbian and gay individuals to hit back against the police raid of the Stonewall Inn. This has come to mark the start of today’s LGBTQ movement.

Michael Holm was a strong advocate for sexual liberation and gay rights. He and Geurt Staal were famous in the gay media world in Sweden and, above all, known for the Revolt newspaper they published for many years. In one of these editions you can read about the gay rights movement’s history in Sweden, where the first Pride-like demonstrations in Sweden were organized in Örebro in 1971 by the Gay Power Club. In 1977, the Swedish demonstrations had a greater impact and in 1979, Liberation Week was organized. This was celebrated until the event changed shape and became Stockholm Pride when Stockholm hosted EuroPride in 1998. When Geurt and Michael got older and stepped down, they left the newspaper that first developed into Reporter and later became the QX of today. 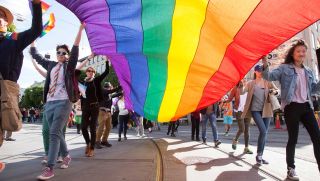 The rainbow flag – The prime symbol of the Pride movement

There are different symbols for the Pride movement, but the most famous is the rainbow flag. The flag uses the colors red, orange, yellow, green, blue and violet to reflect the diversity of the LGBTQ movement and the flag is often used as a symbol of pride among lesbian, gay, bisexual, trans and queer people. The pride flag originated in California but is used today all over the world.

Famous Pride songs in Sweden and around the world

Pride is all about love, color and vibrant music. The songs, the rhythm and the tones are therefore an important element in making Pride the popular festival it is. There are many reasons to visit the Stockholm Pride Festival and many great hotels to stay at in the Swedish capital. The Pride song is chosen every year to represent Stockholm Pride and all that it represents. On this list, you will see famous artists such as Ola Salo, BWO, After Dark and Lena Philipsson. This year’s song, which is also the official Europride song, is Alcazar’s ”In The Name of Love”.

Even internationally there are plenty of famous pride songs. One of the most famous is ”I’m Coming Out” – a classic from 1980 by Diana Ross. Among the more modern international artists, such as Lady Gaga and her songs are featured – for example, ”Born This Way” from 2011.

Nordic Choice Hotels – proud sponsor of Pride in the Nordics

People, Planet and Profit are the cornerstones that make Nordic Choice Hotels not only offer great hotel experiences, but also show that we want to do good – something we call WeCare. This year, for example, we are proud sponsors of Pride throughout the Nordic countries and help make the events better than ever! We have many different accommodations with something for all tastes. Visit our hotel page for the city you want to stay in and find your dream hotel today!

Nordic Choice Hotels celebrates diversity! We are certain that our guests’ and employees’ differences help to create unique and memorable stays, and promote wonderful encounters. Diversity makes us stronger.

We have Room for all!

Family vacation this summer? Get a teen room for 595 kr!

The largest conference center in the Nordics

Comfort Hotel® is opening a new hotel at Kastrup airport