Creaky floorboards and chilly attics. A story of jealousy and murder in the 1920s, a former prison, a socialite haunting a former children’s home and a restless spirit who loves her daily routine! With more than 200 hotels across the Nordics, it would be strange if there weren’t a ghost story or two to be found here at Nordic Choice Hotels.

Large, remote hotels have a tendency to attract ghost stories of former inhabitants and the like, especially if the building has a long history with numerous former inhabitants. While some may have stayed for just a night, others linger…

Do you remember this spooky hotel?

The Overlook Hotel that features in Stephen King’s “The Shining”, is a perfect example of a haunted hotel! But there are plenty of spooky stories lurking about much closer to home, right here in Sweden! Read on, if you dare, and soon you might even be planning a stay at one of these allegedly haunted hotels! 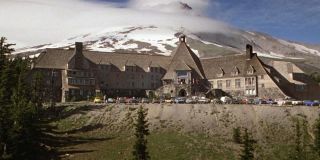 The Overlook Hotel in ”The Shining”. Photo: Warner Bros. 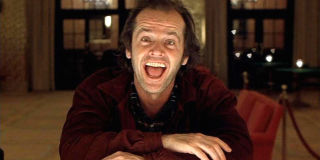 1. Jealousy and murder at the Clarion Grand Hotel in Helsingborg

The Clarion Grand Hotel Helsingborg is located on the Stortorget square in Helsingborg, a city in the Southern part of Sweden. If you don’t like the idea of a ghostly encounter, then stay away from the fifth floor and room 585. Guests who have stayed in this room have felt themselves being watched, felt icy draughts and some even claim to have been pushed out of bed in the middle of the night!

The ghost is said to be that of a former mistress who was murdered by a married couple in the 1920s after the wife discovered the husband’s philandering ways. In a desperate attempt to save their marriage, they decided to get rid of the other woman, who then disappeared without a trace. All this happened during the 1920s, when the hotel was brand new, but the spooky stories keep on coming well into the next century. 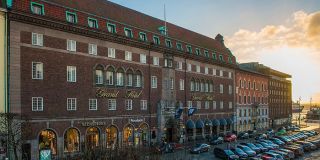 The façade of the National Romantic-style Clarion Grand Hotel in the southern Swedish city Helsingborg. 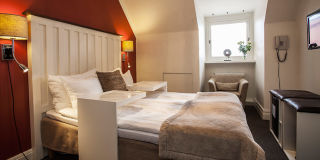 Guests staying in room 585 have reported feeling the presence of a ghost.

2. Arsenic and Old Lace at the Clarion Collection Hotel Bilan in Karlstad

Karlstad, west central Sweden. We’re going back to the mid-1860s. At the Karlstad county prison, the priest Anders Lindbäck was sentenced to death for having poisoned poor and old residents in the community by pouring arsenic into the communion wine. And no, he was by no means innocent. Indeed, he himself admitted to the killings, apparently out of mercy. Before the sentence could be enforced, however, he was found hanging in his cell.

Since then it seems that the priest of Silbodal’s spirit has remained in the building. This former prison is now Clarion Collection Hotel Bilan, a popular hotel with a few cells remaining in the cellar that have been turned into a museum. According to receptionist Lillemor Gaasvik, it is largely this part that is haunted (even though there have been reports of other strange rumblings elsewhere in the hotel):

“One night I went down to lock the museum, but I was stopped by an invisible obstruction. It felt as though I literally couldn’t go down to the cellar. After going back up and calming down a bit, I tried again, but the same thing happened – an invisible wall and a feeling that I couldn’t proceed. So, that night I left the museum unlocked”, says Lillemor. 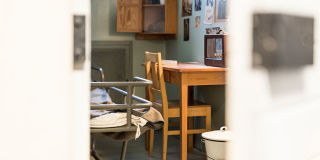 A cell in the prison museum at the Clarion Collection Hotel Bilan. Was it here that the Silbodal priest hanged himself? 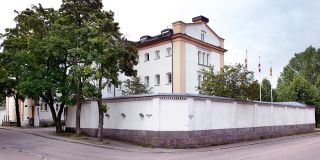 It’s pretty obvious from the outside that the building used to be a prison.

3. Socialite in the attic at the Clarion Collection Hotel Victoria in Jönköping, Sweden

Socialite and philanthropist Ebba Ramsay opened the Victoria home for epileptic and gifted children in 1882. Shortly after, however, in 1903, it became a school and later home to Sveriges Radio (Swedish national radio) in the 1940s. From the 1990s onwards, it has been a hotel, but despite the numerous owners over the years, the former socialite just cannot stay away!

The spooky stories largely centre around rooms 426, 427 and 428 in the attic of Clarion Collection Hotel Victoria. Guests who have stayed there claim to have felt someone sitting on the edge of the bed, or heard the sound of someone walking on newspapers on the floor. Even hotel staff claim to have witnessed unusual events at the hotel, including a feeling of being watched or more specific things like a vacuum cleaner brush moving while the cleaner left the room.

Nobody knows why Ebba is still here haunting the hotel. 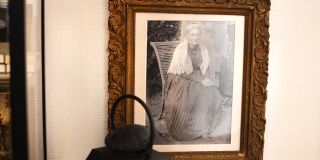 A portrait photograph of the former socialite and philanthropist, Ebba Ramsay. 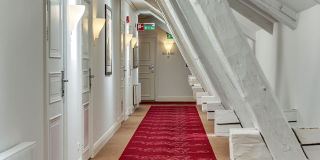 The corridor on the fourth floor, the former attic. This is where the allegedly haunted rooms 426, 427 and 428 are located. 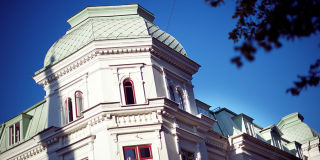 The top-floor rooms at the Clarion Collection Hotel Victoria, viewed from the outside.

4. The waitress trapped inside a burning building. Clarion Hotel Winn in Gävle, Sweden

Guests often have trouble sleeping in rooms 178 and 179 located in corridor C of the Clarion Hotel Winn in Gävle (a city two hours north of Stockholm with car). They say that they can hear furniture being moved around next door. And it’s not just the guests. Even members of staff have heard strange sounds, felt cold draughts and experienced an inexplicable presence in certain parts of the hotel.

During the 1980s, many of the restaurant staff heard high-heeled shoes clicking on the floorboards, clinking glasses and a feeling of being watched – without anyone seemingly being there. They decided it must be a ghost and called it Julia, a name that has stuck. It is believed that she was a waitress at a pub on the same site as the present-day hotel. In 1869, there was a huge fire in Gävle that spread across virtually the entire northern part of the city. The fire started in a carpenter’s workshop on the junction of Drottninggatan/Norra Slottsgatan. The pub was nearby and it is presumed that the waitress died in the fire.

The hotel staff are not afraid of Julia though – she seems to be a benevolent spirit. Indeed, since Julia has been given her own armchair and table in the restaurant, where she is served coffee in the morning and a glass of wine in the evening, these inexplicable occurrences seemed to have abated. 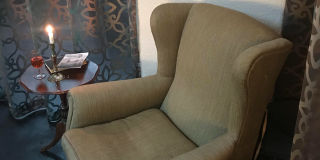 Julia, the resident ghost has her own armchair and every day she is served a glass of wine in the evening and a cup of coffee in the morning.

Have you got the heebie-jeebies yet?

Or are you so curious that you want to get to know our resident ghosts even better? Then go ahead and book a night at one of the hotels mentioned above. And if you’re feeling really brave, you could even request to stay in one of the most haunted rooms!

Vacancies - We need reinforcements and that is where you come in!