Members get the best offers and prices.

Sign in to view your bookings, book a room with your bonus points, company agreement, or to cancel a booking.

Soon you’ll be able to customise your hotel room!

In the near future, you the hotel guest can decide what your hotel room looks like. You will be able to wake up to a sunrise with real sunlight, despite the rain pouring down outside and the fact that the room you wake up in does not have a single window… 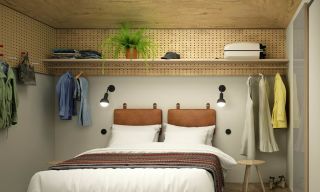 So far this looks like a normal hotel room at HOBO.

Let’s be honest. Everything started because we have some hotel rooms that don’t have windows. Some see this as a disadvantage, but we do not. Thanks to the Embed Project you will soon be able to spend a night in a hotel room where you can choose your own surroundings. With the help of new technology you can turn walls, ceilings and maybe even floors into whatever you want! Your imagination is the only limit!

Can anyone join in and decide how the rooms will look?

To put it as simply as possible, we can say that there is a video played on the walls and ceilings of the hotel room. And yes, the idea is that Embed Project should be an open platform where everyone can contribute content to these videos. Everything from global companies to artists, students and video game developers.

The project will be tested and developed at HOBO in Stockholm. HOBO was opened on March 23, 2017, and is located on Brunkebergstorg, next to At Six and TAK. The Nordic Choice Hotels Future Business department, who are responsible for the project, held an event where they showed us what windowless hotel rooms could look like in the future. Don’t miss out on any information, follow them on Facebook instead.

Future Business, Nordic Choice Hotels’ innovation department, consists of a bunch of smart, technologically-minded and curious people whose task is to look at new technologies to see if and how these can be implemented in the hotel industry. Quite simply, they will simplify each of our guests’ stay, with the help of new technology. They are working on the Embed Project in collaboration with KTH, “Royal Institute of Technology”, and the design agency Barkas.