Carolin’s dad came out as gay: ”I’m so proud of him”

What happens when your life changes without you choosing it? How do you react when your family is broken and one of your parents suddenly comes out as gay? For Carolin Solskär, 27, a turbulent time eventually led to an important message that gave answers to many questions. 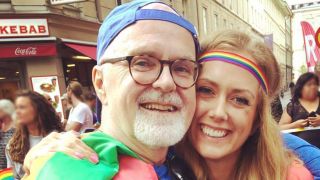 Carolin Solskär with her dad, Curt, at Pride festival.

When Carolin Solskär was 20 years old, her father Curt chose to leave her mother. Why? Had he met someone new? Was there a colleague at work? Frustration, anger and incomprehension grew, and Carolin found it so hard to accept her father’s choice after so many years of marriage that she broke off contact with him for a whole year. But it was another four years before Curt came out as gay.

We had the honor of hearing of Caroline’s story about her relationship with her dad. A father who showed great courage. Read the interview with Carolin and be inspired by this family’s story!

After Carolin’s parents divorced when she was 20 she was confused, sad and angry. But after a year of no contact, Carolin and Curt’s relationship took a happy turn.

– ”It did not really come as a shock to me. The rest of my family and I had had an inkling for a long time.  Even my mom had started to suspect. Dad was deeply involved in the **the EKHO group **(a group supporting Christian LBTQ-persons).Dad and I were even part of the Gothenburg’s Pride parade the year before he came out, and there were pride flags hanging in his apartment and his umbrella was pride colour”, Carolin said, and continued:

– ”I was 24 years old and we sat down and drank coffee and talked about the future and about whether he would find a new partner sometime. He did not think he would do that, he said, and then cautiously added ‘but if I do, it’ll probably be a man next time'”.

The news was so relieving

– ”When he finally said it to me felt so good. At last I knew for sure. I remember doing my best not to start crying, because I did not want my dad to think I cried because I was sad or disappointed; it was only tears of happiness and pride”, says Carolin.

“When he finally told me, it felt so good” says Carolin.

The great fear of hate crimes

When a close relative comes out as gay, several thoughts can go through your mind. The news is not always received with love and acceptance and it can also take time to get used to or understand. When Caroline’s father came out as gay, it was a relief but not entirely without confusion and questions.

– ”For a while, I had some thoughts that my life was a big lie,” says Carolin. ”That I only existed because my dad tried to hide who he really was and that I really should not exist. I know that’s not true, of course. And that’s not something I think about anymore. But now I sometimes feel great concern for my dad that I never had before. I am very concerned that he is going to be a victim of some type of hate crime. That he will be out in the rain with his pride-coloured umbrella, or with a pin on his jacket or whatever, and that some idiots will turn up and abuse or harass him”.

”Just as much father and daughter as friends”

Changing your relationship with a parent does not have to be something negative. For Carolin and Curt, it has meant that their relationship has grown. A big burden has been lifted from Curt’s shoulders and he can finally relax and is a much calmer soul at the moment.

– ”The biggest change I would say is that I have a much better understanding of my dad than I had before. I understand that this is something that has burdened him all his life, something that has always been a weight on his shoulders and made him feel very bad. After he came out and started living an open life, he feels so much better and is a much calmer and happier person. Being so open and honest to me has also meant that we have had a more ‘adult’ relationship. I see him as much as my father as my friend, and I feel 100% confident that whatever happens in my life, I can always turn to him”, Carolin tells us. 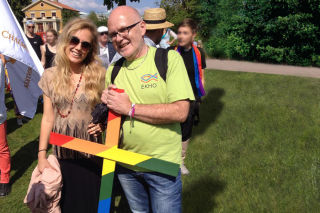 Carolin and Curt started celebrating Pride the year before he came out as gay. Even before that, Carolin began to realise how things actually were and that there was more to it than being very engaged in these issues. When they took part in the Gothenburg Pride parade in 2014 together, Carolin saw how proud and happy Curt was. Since then, they have celebrated Pride in the same way every year; Caroline’s father goes up to Stockholm Pride, and she walks in the parade with him.

To other families and children who have difficulty accepting

We asked Carolin what she would like to say to other families who might have had difficulty accepting it when a relative came out as gay and what her own thoughts were when her own dad told her he was gay:

”My guess is that if you are finding it difficult to accept that one of your parents has come out as gay, it may be because you are afraid that your family will be ‘destroyed’, but that will only happen if you allow it to happen. For me and my family, the fact that my dad came out was a chance for us to start over and create the happy and healthy family we always wanted – but did not understand that we did not have.

We are not the typical nuclear family, but we are a much better and more fun family now than we ever were before.

”For me personally, the hard part was dealing with my parents’ divorce, and that my dad ‘left’ us. I was angry and disappointed because I thought he destroyed our happy family. Seven years later, looking back in hindsight, I know that my parents were not happy at all, at least not nearly as happy as they are now. Both in their own separate lives, and in the friendship that eventually emerged between them. When I look at the family I have today, I can do nothing but feel so grateful. We are not the typical nuclear family, but we are a much better and more fun family now than we ever were before. When I compare Christmas Eve, Midsummer or birthdays from 10 years ago and what they look like now (because we still celebrate with the whole family together), it’s like night and day. We laugh and talk and have great fun together. We support and believe in each other. THAT is what a family is to me.

– ”I would also like to say: see it as an opportunity to create something better, and be understanding of how big, strong and courageous it is for your parent to come out as gay. They probably grew up in a time and environment where homosexuality was seen as incredibly wrong and strange, and your parents probably lived all their lives with shame and anxiety. Imagine how daring it is, then, to be open to you and above all to themselves. Pay homage to that”.

Carolin’s tribute to her father:

Dad, I cannot imagine a better role model than you. You were almost 60 years old, married to a woman for over 20 years and had two children with her. In spite of that fact, to finally dare and have the strength to be true to yourself – I think that is so awesome. You have shown that it is NEVER too late to dare to be yourself, and you have given me the power to always dare to be who I am. I’m so glad you’re my father. I’m so glad you’re my friend. I’m so glad you dared to take the step and dared to make the hard and difficult decisions you had to make. I understand there were moments when you doubted and thought ”did I do the right thing?” And I just want you to know that you did. You did the right thing. Thank you for being so strong and courageous. I am so proud of you.

At Nordic Choice Hotels we welcome you just the way you are. We are convinced that the diversity of our guests and employees contributes to creating unique hotel experiences and magical meetings. Diversity makes us better. Our door is always open.

We have Room for all.

Proud parents: “It is incredibly important that there are good role models”

Everything you need to know about the lively Pride festival! 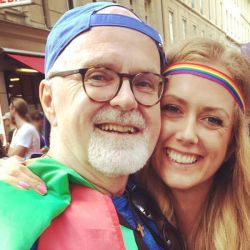