Checkin’ In: Christian Lundén – The Man of the Future

What will hotels be like in 20 years? How do you get from an idea, to launching something like the first hotel chain in the world? And what does voice control have to do with hotels? These are some of the questions Christian Lundén, Director of Future Business, and his team are working on finding the answers to.

The man who wanted to work with the past ended up working on the future. The common denominator is that Christian Lundén has a desire to discover the undiscovered. Eventually he discovered that he did not want to find, but rather invent – and now he does that every day as Director of Future Business in Nordic Choice Hotels. Already he lives a little further into the future than the rest of us.

– Three years ago I actually installed a chip in my hand. I hoped that it could replace all the cards I use all the time, that I could use it as a bus card, to get into the SATS and to open doors. But I haven't used it so much. The technology has not quite come of age yet. But I believe that things can be made easier, that we can find smarter ways to do things, and that we can avoid having so much stuff.

What did you dream of being when you grew up?

– I actually wanted to become an archaeologist, he laughs. I wanted to explore other environments. But then I realised I wanted to be an inventor, not an explorer.

What did you become?

– Now I am Director of Future Business in Nordic Choice Hotels. My kids think I make toys. But if I were to sit down and explain to them what I was doing while they are at school, I'd probably say ’Dad is working to make it even more enjoyable to stay at a hotel’.

Our mission in Future Business is to find new technology, new business models and to shape partnerships with other companies and start-ups so that we can create new conditions for the hotel industry. Now we are working with everything from Blockchains to seeing how nanotechnology can help us serve healthier foods. We do this, among other things, by being inspired by companies that operate in completely different industries than us. 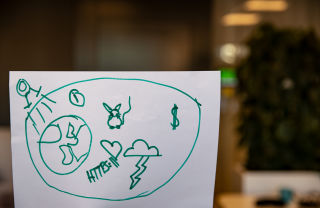 INTERNET - a work of art by Christian Lundén. The globe symbolizes that it is all over the world. The cat, because there are many of them on the internet. The internet = heart, lightning and information. And information = $. Mark Zuckerberg is a symbol that most people have of the internet. Or at least of a Facebook account.

What projects are you working on now?

– Now we are creating the hotel room experience of the future, where guests can change how the hotel room looks by projecting video on roofs and walls via an app. It allows you to be high on a mountain, be an audience at a concert or a sports event, or just be surrounded by calm, meditative impressions – all while lying in bed. Everyone will actually be able to create content for the room and then it will be a bit like an App Store for hotel room experiences.

We also make smart furniture, where we build in wireless chargers into the furniture we design, so that our guests can always have their mobile phones charged, regardless of whether they are eating in the restaurant, lying in bed, or having a meeting at a conference table.

What is the most enjoyable project you have been involved in?

– Mobile Keys! We started with the development of mobile keys 10 years ago, even though the technology was not that advanced at the time. But we still wanted to test it, because we saw that there were huge opportunities. It took a long time, but now we have rolled out this feature before anyone else in the world! And now, big hotel chains like Hilton, Marriott, and Sheraton have started with this as well. It was really cool to be part of that journey and especially to do something for the very first time. 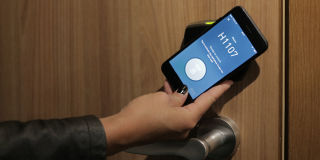 Find the Mobile key in the Nordic Choice Hotels app

Has a project ever gone really badly?

– We tend to scrap projects quite early if we see that they are not going well, but one time we tested a Bluetooth project that completely failed. It was when the Beacon technology (a type of signal generator) had just arrived, and we thought this was the communication channel of the future.

The project meant that the guest would be able to get different messages in different places via an app. At one point we had 100 different beacons around town that would guide you. So when you passed somewhere where we had a beacon, you would get a message on your mobile phone, such as ‘This restaurant has the city's best burgers, and as a guest at our hotel you get a 20% discount’ or when it was noted that you came down to the reception you could get the message that ‘It will rain today, to your right there is an umbrella you can borrow.’

I still think there are great opportunities in this, but when we did it, no one would use Bluetooth because it drained the phone’s battery too much, and no one would give the app access to know where they were, so they never got any messages. So we had huge amounts of beacons, messages and hopes, but nobody got our messages, laughs Christian. 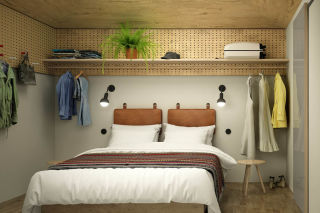 What will the hotel industry look like in 20 years?

– It will actually not be so different from how it is today. We can compare it to car companies: no matter how the world has evolved, the car has always had the same characteristics. There have been no radical differences in appearance. Cars still have a steering wheel, a motor and four wheels. But security, technology and speed have become much smarter and more advanced.

Our hotels are likely to look quite similar to what they are today, but they will have smarter solutions that make your hotel stay even smoother. Moreover, guests will be able to get more personal experiences because the hotels will know more about those who stay there. The biggest change we will see is that the hotel experience will not stay within the four walls of the building.

Christian Lundén, man of the future, what gadgets do you have in your home?

– All of them! I have at least 30 things connected at home. The coffee machine, the washing machine, the locks, all the lamps, the fire alarms – all of that is connected to my phone. And I can talk to all the stuff. I can also control it so that the coffee machine starts brewing coffee when the alarm on my phone rings in the morning.

And then I have made it so that when I land at the airport after a business trip, checking in on a check-in service and hashtag "#land", it starts to flash pink in the lamps in the living room at home. Then my children know that Dad has landed safely.

Mobile Keys – how does it work?

Which is your favourite hotel? It’s got to be THE THIEF in Oslo. There is an incredibly good atmosphere in the hotel, and not least because you always get such good service.

What is the best thing about staying at a hotel? The everyday luxury. It's grand to be taken care of!

What is the worst thing about staying at a hotel? In a working context, it is being away from my family.

If you could choose – who would you eat hotel breakfast with? Elon Musk, founder of Tesla. He dares to say things that go against the norm and he dares to try new things. He doesn't think about the consequences, he just does it.

What do you always eat at the hotel breakfast? That’s easy. Bacon!

Do you have any strange habits when travelling? I've probably been a bit scarred by my work, but I always try to test all the technology there is in the hotel I am staying in.